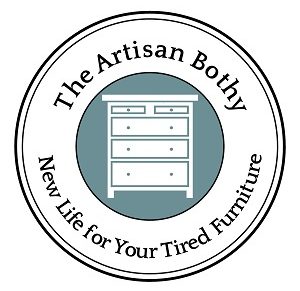 Every once in a while a piece of “furniture” comes along which completely changes your way of thinking. In this case it’s a piano.

“I’ve been admiring many of your pieces of furniture on your page . Just wondered if restoring an upright piano would be something you could do?”

I am not going to lie. The message filled me with an immediate thought of “eek”. I mean, there were so many things to consider. Piano transportation is specialist, right? So that’s me and my trusty white van out of the running – if this was going to happen, it would be an “on site” job only. Have you ever tried to pack up your studio and take it with you? Then there is the temperature. It was in a garage then low temperatures and chalk mineral paint don’t mix. All the reasons why “not” and none of the reasons why “yes”. Yet, part of me was already thinking through the logistics.

Fast forward to this week and that’s me, in a garage. A toasty garage actually. With half my studio in my van. Sanding and cleaning one “tired and dated” John Broadwood & Sons piano, ready for it’s “modern makeover”. That was my client’s brief in a nutshell. Well, kind of…

Those who have read any of my social media posts about re-purposing furniture, will know I love a bit of provenance. Broadwood is described as the oldest piano company in the world. Their instruments have been enjoyed by many a famous composer and they holds the Royal Warrant as manufacturer of pianos to royalty. You could see this piece had history – he could tell us a few secrets I suspect. But this is not intended to be a folly. No display piece. Oh no, it already has its place reserved in the home and a young person itching to knock out a note or two.

My client chose a Frenchic neutral cream. Light and airy. Something which would stay in tune (no pun intended) with the home, no matter which direction the decor might go in the future. A nod to Scotland with a bit of thistle stencilling would stop this being too plain. A straight forward “ask”. Though it took several hours of serious cleaning. I actually thought there was a piece of felt under the keys – no, just years and years of fluff and dust from many years out of action. He would also demand a total of five coats of paint, and a bit, to cover. This piano was clearly not going to come along easy. But come along, he did, eventually.

There are two things I really love about re-purposing furniture. One is, once the messy preparation is out of the way, watching the layers go back on as the transformation begins. I love it. It’s like they are getting ready for the Oscars. Dressing with great care, layer by layer until the finishing touches suddenly make them feel a million dollars. But the icing on the cake is seeing the reactions of those who saw the before – and then see the after. The unrecognisable after.

But This Painted Piano Didn’t Stop There

What I didn’t tell you was, I met my client twice before the final direction was agreed for this makeover. Meeting number one was all very reserved. Simple cream paint finish with a wee stencil. Like I said, easy peasy really.

Meeting number two, however, would see the conversation take a twist. And, more importantly, would result in me agreeing to add some colour. Secret colour. Taking inspiration from my client’s love of Steven Brown artwork. A well kent face who has made a name painting his famous McCoos (among other things) in an array of colours.

And So The Piano Became my “Joseph”

The keys were painstakingly removed (thankfully already numbered), and the rods cleaned, sanded and then painted in a Steven Brown inspired rainbow. Don’t panic. The rods simply set the movement off which ultimately hammers the strings. They were then popped back into place. “But why? They are hidden!” I hear you cry? Indeed they are, normally. But there is nothing normal about this project. This tired, dusty, chipped, paint and cement spattered piano (did I mention his wonky pedal) has now become a piano of many colours. And so I would affectionately begin to think of him as a Joseph.

Joseph is no longer an abandoned piano, skulking at the back of the garage. Instead, he is a beautifully painted piano. A man with a new lease of life – and with many disguises. Some days he will be happy in his plain clothes. Other days he might fancy throwing off his jacket to reveal his funky shirt. Or he might go the whole hog and expose his entire inner soul. Hammers, strings and all.

And I can just picture it now. All those colours, flicking and jumping, as little fingers play.

If you would like to commission a piece by The Artisan Bothy, then get in touch

You had me at “she loves writing”

No-one Puts Baby in the Corner