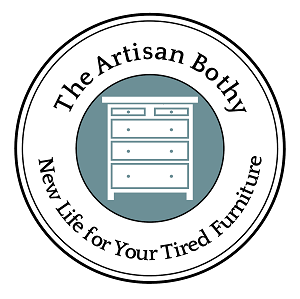 And Oxford Dictionaries tells me that, despite a long, and sometimes dubious meaning of the word swag, it is now accepted by the cool kids as ‘bold self-assurance of manner or style’.

I can see him nodding, in a kind of Joey Tribbiani sort of way.

I am going to be honest and say I probably paid too much for this fella. With the benefit of hindsight, I realised he would cost a lot to bring back to a standard someone would be proud to use – and not simply look at.

But he had me fooled

He had super Hepplewhite handles. And evidence of some lovely insets around the locks.

Actually, let me try that again. He had the remnants of, what I suspect, were some repro Hepplewhite handles. Almost all were damaged, most cracked, some broken and many likely to cut a hand to ribbons. I tried and failed to find authentic replacements of this size – and enough of them.

Many of the keyholes had pieces missing too, and in one case, completely gouged out (one can only imagine the force and effort needed, somewhere back in his history, on discovering a locked drawer and no key).

But I was captivated by his presence. His character. And so I ignored the business mutterings going on in my head. Solid mahogany throughout he was made to be in the spotlight. And I already loved him, battle scars and all. I was sure we could work through our differences.

So I had to make a tough decision. Attempt to restore or give him a new coat.

I can see the purists shaking their heads, cringing, tut-tutting. But you have to believe me when I say I truly love original antiques. And when a piece can be taken back and polished up, safe in the knowledge it is going to be loved again, as is, then I do that. I thought long and hard. I didn’t touch him for months except to assess the true condition. Put simply, George was in no fit state.

And, actually, there is an entirely different argument sometimes.

See when you buy an old house? I mean, a really really old house? That has rotten windows and doors, no damp proof course, etc etc. Is it ok to renovate and add to its character? A fabulous panoramic window? Sympathetic extension with a modern twist? New doors and windows. A brand new colour scheme? It doesn’t detract from it’s character does it? It is still the home you fell in love with, underneath. Just brought up to modern standards.

And that is what happened to George!

His “roof” didn’t need replacing, but sure looks better for a total sand back, oiled to bring out the deep rich mahogany, and then waxed to protect.

I then gave him a brand new coat of “no nasties” mineral chalk paint. It is super stuff which allows him to breathe.

Then we swapped out his tired broken handles for new ones. Seriously, you wouldn’t live in a house where you cut your fingers every time you opened the door, would you?

And then, because he wants his “residents” to feel at home, we did a bit of interior decorating. A gorgeous rich blue and gold paper liner to compliment his rich blue paintwork. Now, with drawers this big I am thinking of moving in.

I told you, he’s got swag. And doesn’t he know it. Serious attitude.

So where is George now?

He lives with me.

Mr Smith suggested it, actually, as he too had become quite attached to his buddy. To be fair he did spend a couple of days fixing up the broken locks. Hours and hours using his carpentry skills to make good and mend.

It wasn’t an instant decision. I did have enquiries to buy. But size matters! And George is a big boy. So many tried to make him work and had to concede defeat.

See, it was meant to be, George. You and me, and Mr Smith makes three..

By the way…George has a cousin. Want to talk options? Call me

You had me at “she loves writing”

I Couldn’t Bring Myself To Call Him Donald